My exposure to fine art began early in life. My father, Phillip Levine, is a well-known and respected Pacific Northwest figurative bronze sculptor and he involved me in his work beginning at an early age. By the time I was thirteen, I had built my first foundry and have assisted him throughout his career. My father’s time and space were always available and this is where I began to learn to use tools and to conceive in three dimensions. Out home was filled with art and artists and I had the great fortune to grow up in a visually and intellectually rich environment. My mother Rachael, an educator, bestowed to me her great love of the natural world and its mysteries.

I attended the University of Washington with a dual interest in art and science. I perceived a close relationship between the two disciplines and continue to explore this connection in my work to this day. Although I graduated from Colorado State University with a BFA and a concentration in ceramics, it was a circuitous path that led me though sculpture, ceramics and glass before I was introduced to fine furniture making while teaching art and design at a local college. Because of a wide exposure to varied media I have been able to integrate a broader range of materials and processes into my work. Although I don’t have a strict formal education in furniture and furniture making, I feel that my approach to this discipline began outside convention and has thereby allowed for greater and freer exploration.

I live amidst nature on Bainbridge Island, Washington. The natural world has always been the source of inspiration for my work. The wonder of what is has simply given rise to a life and an opportunity to explore ideas and forms as a natural part of being human. 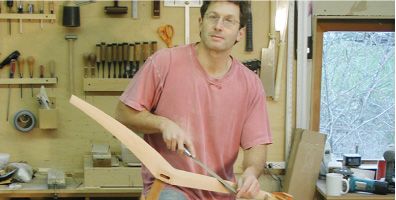